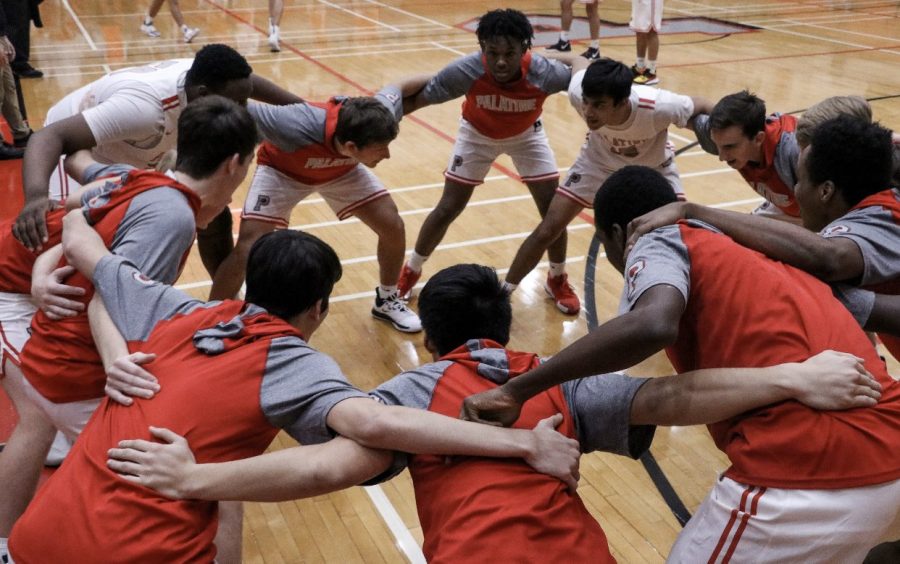 Palatine Boys Basketball prepares for a game with a huddle.

As the fourth quarter comes to an end, the buzzer sounds as the Fremd High School Vikings shoot a 3-point basket. However, the Palatine High School Pirates call a timeout at 1.8 seconds left of the quarter. The last second of the game is crucial for the win that leads to the IHSA State finals and the title of State Champions.

On Wednesday, March 4, FHS hosted the IHSA Regional Basketball Tournament. The game was between town rivals the Pirates and the Vikings. Students came in themes their school had chosen for the game; the Vikings dressed in all black and the Pirates wore white. Anticipation from both teams filled the room as all eyes were locked on the court.
In the first quarter of the game, FHS scored the first point and had a lead against PHS. PHS was struggling to make a comeback and reach the lead.

By the second quarter, the Pirates were able to catch up to the Vikings. The game became repetitive when after a team scored a point, the opposing team scored the same amount after.

As the second quarter came to a close and as the game proceeded into the third quarter, the score was tied 25-25. FHS began to have the lead in the quarter. At first, the Vikings were well ahead but the Pirates started to strengthen their technique to regain points to tie with them again.
At the end of the fourth quarter, the teams were working their hardest as they were to win the game. PHS was ahead by a few points and were sure of having a win. At the sound of the buzzer that ended the fourth quarter and the game, a FHS basketball player scored a 3-point basket that made most of the gym roar. Palatine called a timeout at 1.8 seconds that the referees allowed to occur. The timer restarted at 0.8 seconds and PHS had the ball. The Pirates were not able to shoot the ball all the way from FHS’s side of the court.