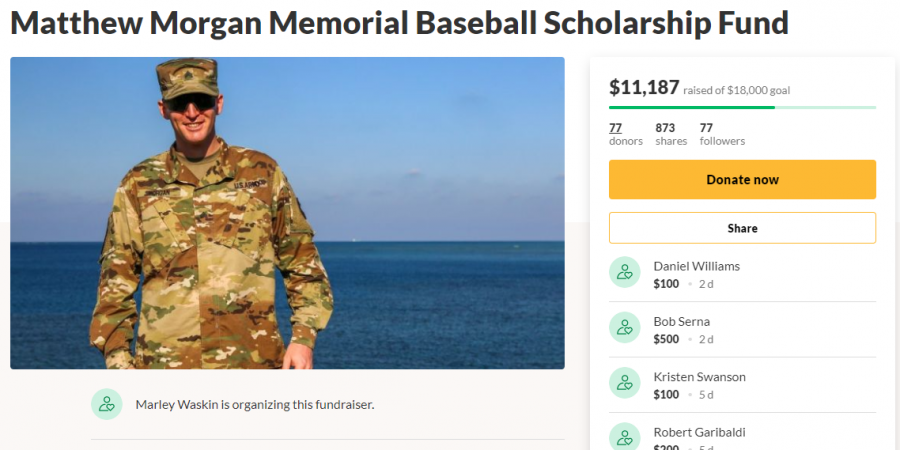 Screenshot of the Matthew Morgan go fund me page.

This GoFundMe page seeks to raise money for a scholarship for PHS baseball players.

Last month, the Palatine community experienced a devastating loss. Matthew Morgan, a PHS graduate and Staff Sergeant in the U.S. Army, passed away on a technical diving charter off the coast of Okinawa, Japan. In his memory, Morgan’s family is organizing a scholarship at PHS for the next 18 years, commemorating Morgan’s number when he played baseball at Palatine, another one of his passions.

In Morgan’s honor, the first scholarship will be given to a PHS baseball player in Spring of 2020. To date, the scholarship fund has already exceeded $10,000 and is on its way to reaching its goal of $18,000.

“Matthew was so proud of PHS and remained close with his baseball coach, Paul Belo, up until his passing,” Echo Morgan, Matthew Morgan’s mother, said. “Whenever Matt would come home to Palatine to visit he would put on his army uniform and head over to PHS where Coach Belo would have him talk to current baseball players about leadership, working hard, and never giving up on your dreams. Palatine High School baseball was always very important to Matthew and has always had a special place in his heart.”

Coach Belo became a mentor to Morgan during his time at PHS, and over the years it has become clear that the admiration was reciprocal.

“As a student, athlete, and soldier, Matthew was self-less, tireless and committed,” Belo, gym teacher and baseball coach at Palatine, said. “To say that Matty recognized the importance of representing something greater than himself is an understatement in and of itself and no matter the role he played (son to Echo, brother to Marley, or Husband to Amanda) or the uniform he wore (#18 or Sgt. 1st Class). Matty was a kind spirit who died as he lived, in service of others.”

Morgan’s passing was undeniably tragic and unexpected, still Morgan lived and died doing what he loved– diving. In Okinawa, Morgan was able to experience the things he found most joy in– diving, serving his country, playing ball, welding, and working endlessly to achieve his dreams. Among those who will feel his absence the most are his wife, Amanda, and their family. Morgan’s determination and courage will be missed by the Palatine community at large, as well.

“Matt was an extremely motivated young man,” Shannon O’Brien, counselor at PHS and mentor to Morgan, said. “He was always proud to do the right thing and would get frustrated with others who didn’t follow suit.  When he made a decision to pursue something he tackled it with determination and grace. He was the kid that would go the extra mile to be successful.”

Anyone who wishes to contribute to the Matthew Morgan Scholarship can do so via  this fund.