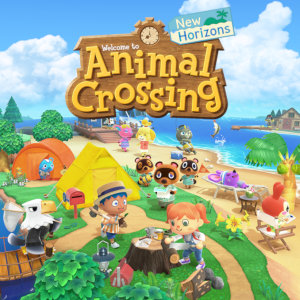 The highly anticipated Animal Crossing: New Horizons has given people a way out of these trying times into a life all according to them.

Animal Crossing: New Horizons was released March 20, 2020. In the few weeks that it’s been out, it’s created riptides in the gaming world.

“The game is currently the fastest-selling Switch game ever in Japan with 1.88 million physical copies in its first weekend, beating out even the Pokemon Sword and Shield, which managed 1.36 million copies in the same time period,” senior contributor, David Thier said in his article for Forbes.

This the fifth development in the Animal Crossing series. It’s the first out of the series to be played on the Switch. The release of this game couldn’t have had more perfect timing. Everyone is stuck inside with nowhere to go, but the creators behind this game have given people a way out. Nintendo has given people access to another world of their own creation and has allowed them to find something to smile about during this difficult time.

During this pandemic, Animal Crossing: New Horizons has provided people an escape from reality. In this game, users are able to create their own island from scratch. They get animals to live on their island, customize the island and their home, etc. Date, time, and seasons sync in real time. To make a living on the island, you earn money from catching fish, bugs, etc.

Long time fans of Animal Crossing have been waiting for this game since the last release, which was  Animal Crossing New Leaf on the Nintendo DS. By having a Nintendo account, people are able to visit friend’s islands. It’s a way to communicate with friends in a fun way during the age of social distancing.

People can do whatever they want without the fear of repercussions. It’s a nice break from reality. However, it teaches a sense of responsibility as a person’s whole life is basically in the hands of a raccoon named Tom Nook. You work to pay off the mortgage on your home to Tom Nook, but it’s not forced that you do. Tom Nook helps you set up your life on the island and you work to create your island into a better place.

Animal Crossing picked the best time to release. It’s giving people something to enjoy and look forward to while staying inside their homes. If you’re struggling to keep yourself occupied and looking for something fun to do, look into Animal Crossing: New Horizons. It’s a classic lifelong game that you can’t get bored from, but all while helping to bend the curve.