“The Last Dance” peeks behind the curtain of Jordan’s Bulls 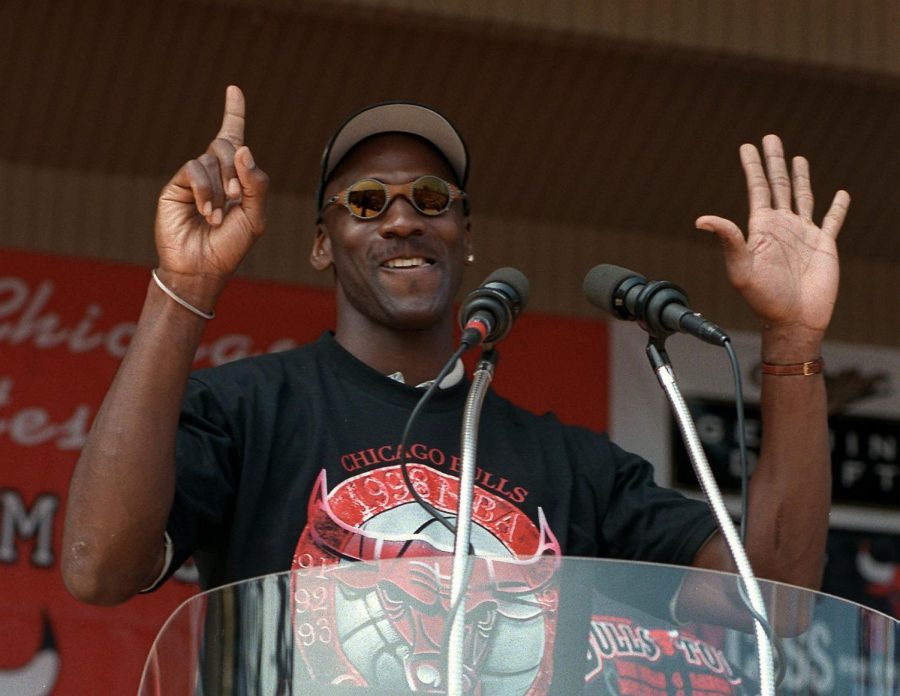 Michael Jordan holds up six fingers for each Bulls championship as he addresses the Grant Park crowd on June 16, 1998.

Sports games, competitions, and tournaments have been cancelled due to strict social-distancing rules pertaining COVID-19. Sports channels have been releasing recorded games from the past to stream on their programs. However, the Entertainment and Sports Programming Network, most commonly known as ESPN, is providing sports fans with a series that delves into the life of former National Basketball Association player, Michael “Mike” Jordan.

ESPN launched a miniseries called “The Last Dance” on April 19, 2020. The series follows Jordan, famously known for playing with the Chicago Bulls, as he began his professional basketball career in 1984 for seven years. Clips of interviews and games from later seasons are compiled in the series as well to depict the season’s a film crew was not with the team. Multiple teammates and coaches of Jordan’s were featured in the first two episodes of the series like Scottie Pippen and coach Phil Jackson.

“As a rookie, he proved he was not a rookie,” Pat Riley, the Miami Heat team president, describes Jordan at the beginning of his career with the Bulls.

Episode one of the 10-episode series initiates the series with tensions that arose throughout the season with general manager Jerry Kraus and coach Jackson. The Bull’s management team pressured Jackson to sign a deal that prolonged his season for one more year. Within the management team, Kraus was an important individual that was hired by Jackson. This agreement triggered Jordan to go into a rage and threaten that he would not play unless Jackson was coaching. This became the turning point in the whole series.

“I was the lowest on the totem pole. I had to build up [my status],” Jordan says about his 1984 starting season.

Before the start of the NBA season, coach Jackson rounded up all the players for a team meeting. The meeting would influence the name of the future docu-series. Jackson had created a team handbook for the 1997-1998 season, which would be his last. This handbook was infamously named “The Last Dance.”

The second episode of “The Last Dance” featured Pippen’s struggle after his 10 season career with the Bulls and Jordan’s childhood.

“I didn’t win without Scottie [Pippen],” Jordan says when Pippen went on a hiatus in the ‘97 season.

Essentially ranked second in the NBA series in 1997, Pippen faced challenges that could not be changed or reversed. The Pippen family unfortunately had two members within the household who were paralysed and in wheelchairs. In 1991, Pippen signed a seven year contract for $18 million with the Bulls.

“I needed to make sure people in my corner were taken care of,” Pippen says.

The contract was starting to become a burden when Pippen had surgery on a ruptured tendon in his ankle that had to undergo surgery. Pippen urged for the contract to be changed but the Bulls management team refused.

“He forced management to change his contract,” Jordan said.

Once Pippen has left the NBA season, the series goes on to talk about Jordan’s childhood. It describes his childhood and the journey he went through to be drafted into the NBA. Much of Jordan’s struggle came from the competitiveness he had with his brother, Larry Jordan.

“I wouldn’t be here without the confrontations with my brother,” Jordan says about his young basketball days with his brother.

Finally, the end of the second episode details how Jordan broke his foot at a game and had to go through extensive recovery. The Bulls refused to let Jordan play full half games after he was cleared to play. At first, he was only allowed to play seven minutes in each half of a game. Eventually, he was allowed to play at the end of a game against the Boston Celtics to score the winning point, which would influence his career in the future.

“The Last Dance” continues on with episodes three and four being released at 8 and 9 PM on April 26, 2020. You can find the series on the ESPN app, ESPN.com, or on the ESPN channel.