Trump should be an advocate of mail in voting 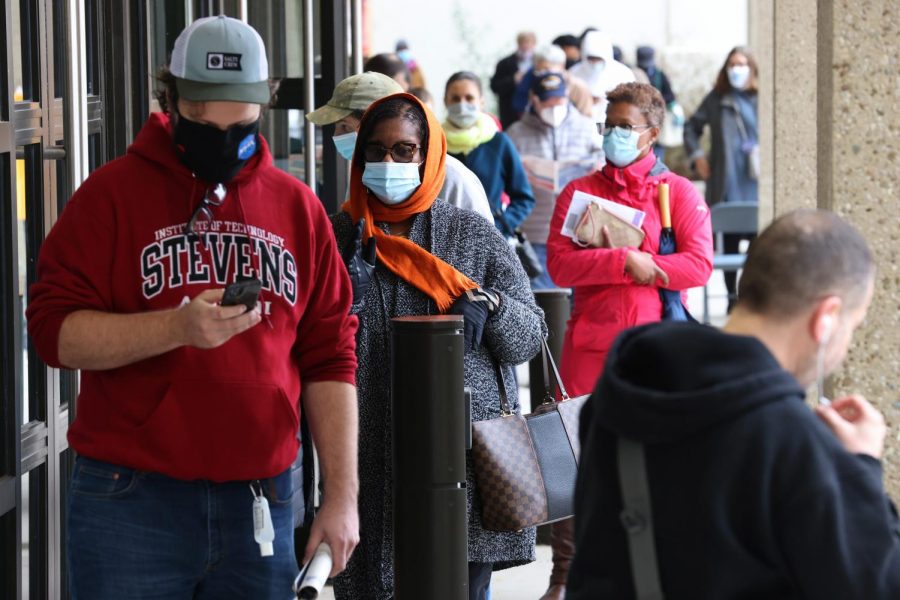 People wait in line to vote at the Montgomery County Executive Office Building on Monday, Oct. 26, 2020 in Rockville, Maryland. Today marks the first day of early in-person voting in the state of Maryland.

With an ongoing pandemic, mail in voting has been seen as a safe alternative as opposed to in-person voting. The expected response from a president would be to advocate for the safest actions during a time of crisis.

However, President Trump has expressed that the mail in system is fraudulent and is actively encouraging Americans to vote in-person. Could he be throwing a massive wrench in his re-election plan? Despite Trump’s concerns, I believe he could be doing more harm than good for his own campaign.

Daniel Smith, a political science professor at University of Florida, explains how Republicans have always been the ones to push mail-in voting.

Republican voters are usually “older on average than Democrats…affluent…less transient,less mobile population, which makes the delivery and return of absentee ballots easier,” Smith explains. This leads to mail-in voting being easier to execute and allows campaign staffers to easily convince voters that may need more convincing to go vote in person.

Another damning statistic comes from a Pew research Center Poll. 60% of voters who support Joe Biden as the presidential candidate are planning to vote by mail as compared to the scarce 20% Trump supporters.

If the majority of Trump voters are planning to vote in person, they are leaving themselves susceptible to the possibility of not voting(long lines, less polling places due to the pandemic) and more importantly more susceptible to catching COVID-19.

Why is President Trump so negatively positioned against mail-in voting? He has repeatedly voiced baseless concerns. Some examples include believing mail in ballots will only be sent to Democratic areas and that American mail in ballots will be printed by foreign countries.

There has been no viable evidence to prove these claims. The FBI had explained that they have “no information about any nation state” planning on meddling with the US election on a mail-in level. They also note how difficult that would be on such a complicated scale.

Trumps stance on mail-in voting will be detrimental on the country, but could be more detrimental to him and his campaign. If I were him, I would start to fund the USPS and encourage people to vote by mail, as we inch closer to the voting period.

However, regardless of who you are voting for, make sure that you find a safe option to vote and encourage those around you to find the safest way for them to vote.