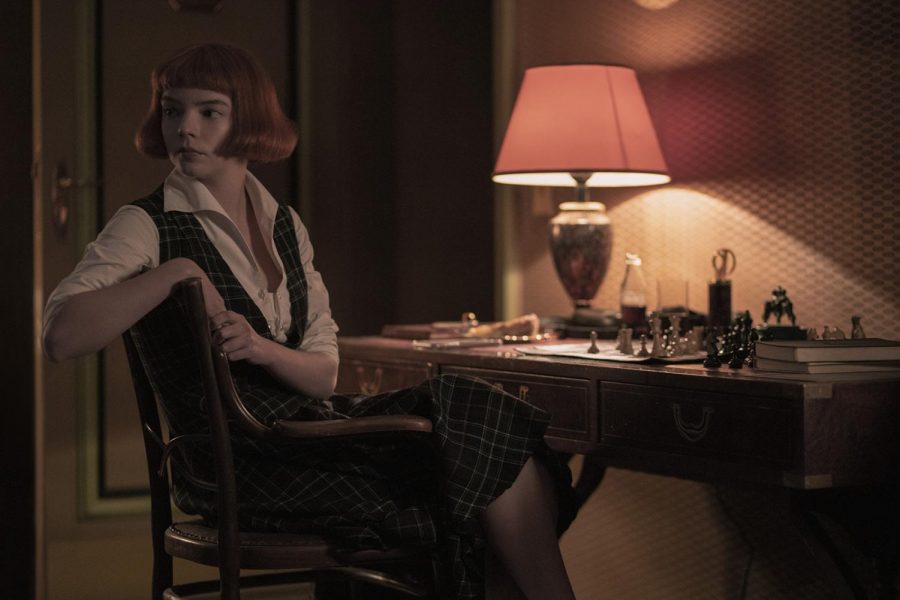 Anya Taylor-Joy stars in "The Queen's Gambit," on the Netflix drama series.

Netflix’s adaptation of the novel The Queen’s Gambit by Walter Tevis takes the polar opposites of perfection and destruction coexisting all within a young woman’s life.

The Queen’s Gambit centers around young orphan Beth Harmon and her path to being the world’s best chess player, while battling the demons of her addiction. An unconventional but realistic coming of age story taking place during the Cold War era.

“She is both terrified of being alone and also feels like it’s the only place where she’s safe,” actress Anya Taylor-Joy said in an interview with Rotten Tomatoes TV. “The fighting of those two impulses is what causes her such pain as she’s desperate to connect.”

Taylor-Joy’s character represents self-destructive behavior that’s all-consuming. She’s a ticking time bomb waiting to go off at any moment of loss. For Beth to achieve perfection, she destroys herself in the process.

After learning how to play chess in the basement of the orphanage, Methuen Home, she strove to become the best. Her sights were set on ultimately beating the Russian Grandmaster Borgov.

Beth believes that she needs drugs to play at the level of a world class player. However, when she played against Borgov she was under the influence. Eventually causing her to lose and spiral out of control rapidly.

To achieve the level of perfection that she wanted, she kept destroying herself. In the same process where she thought she was attaining perfection, she burned out, almost to a point of no return.

She pushed people away when the lines began to get blurred from her addiction. One instance was with her relationship with Benny Watts. When she was with him, he held her accountable. It was as if she didn’t indulge in her vices because she believed he would judge her and look down at her.

Once she lost a match in Paris, she fully distanced herself from Benny and everyone. With no one there to hold her accountable, she began to go on a dark path. The very thing that she believed to help her win was the very thing that caused her to lose.

Beth is a young woman that found something when she was a child that was stable and it became her anchor. Chess was her anchor, but with her drug use it quickly set her adrift. To simultaneously keep both things in her life, she attempted perfection at the cost of everything being destroyed.