Is social media taking a negative toll on students? 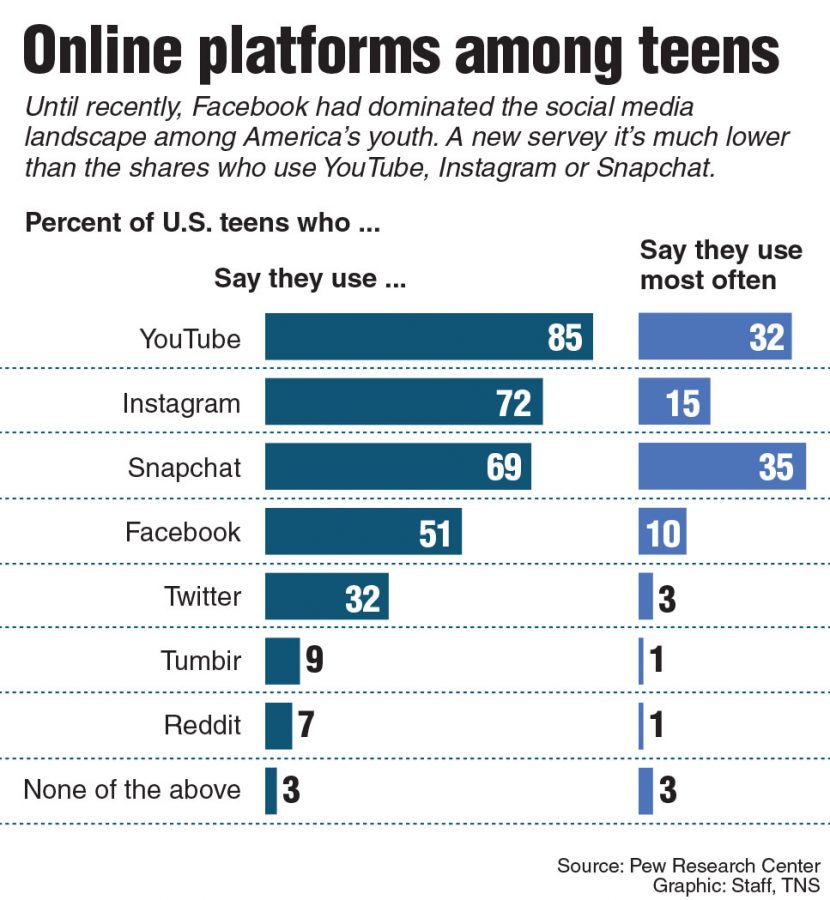 Chart on the popular online platforms teens use.

Social Media is a core part of our world, giving us our daily intake of current events and news. However, it could be taking a negative toll on students especially.

According to a 2018 Pew Research Center survey of nearly 750, 13- to 17-year-olds, found that 45% are online almost constantly and 97% use a social media platform, such as YouTube, Facebook, Instagram or Snapchat. With this data in mind, it’s no surprise that I see many of my fellow students using social media themselves.

It is much easier for something fake or concerning to be shared on these social media platforms, than it is for traditional media, and considering how long we spend on social media, I wondered, what kind of a toll does that take on students, whether the news is real or fake?

“Whenever I see something on any social media, my first instinct is usually to like it and then share it,” says a sophomore at PHS, Jario Montes. “If I think it’s good enough, anyways.”

“I don’t use typical social media- I stick to YouTube mostly. But a lot of their stuff can overlap with each other,” said sophomore Joseph Kurian “Especially if it’s a huge trend or something.”

Although we’re drifting away from traditional news because of social media, teenagers are still getting their news from it. Research from media trust advocates Common Sense and Survey Monkey found that while 78% students believe that it’s important to follow current events, 54% of them get their news from social media platforms, Facebook and Twitter.

“I don’t watch the news a lot, but I’m still caught up with current events because it’s always easy to see what’s popular.” said Montes.

But just because something is popular doesn’t mean it’s true. People who post things that are fake aren’t looking to raise awareness for something or to inform others- it’s about spreading lies that catch your attention and encourage you to share it.

“Fake news is as much of a problem in news as it is in social media,” said Kurian “But since there isn’t an organization behind it, it’s hard to hold someone accountable.”

With the right ingredients, it can take only a day for something, whether it’s fake or true, to be spread around like wildfire. Even after the fires have died down, it can be difficult to pinpoint who started it in the first place.

How much of a problem it is depends on who you ask.

“I don’t usually think about what I share, mainly because I don’t expect it to be this huge thing afterward, it’s just sharing to a friend.” said Montes.

Others disagree and believe that we should be taking into account what we’re sharing around to our friends.

“You can’t really predict what’s going to happen when you share something out, so you have to think about it,” said Kurian “At least for a second or two.”

Even though we’ve gotten used to the usual liking and sharing, we need to understand that information is power, and with all this information right at our fingertips, you need to make sure what you’re sharing isn’t false.