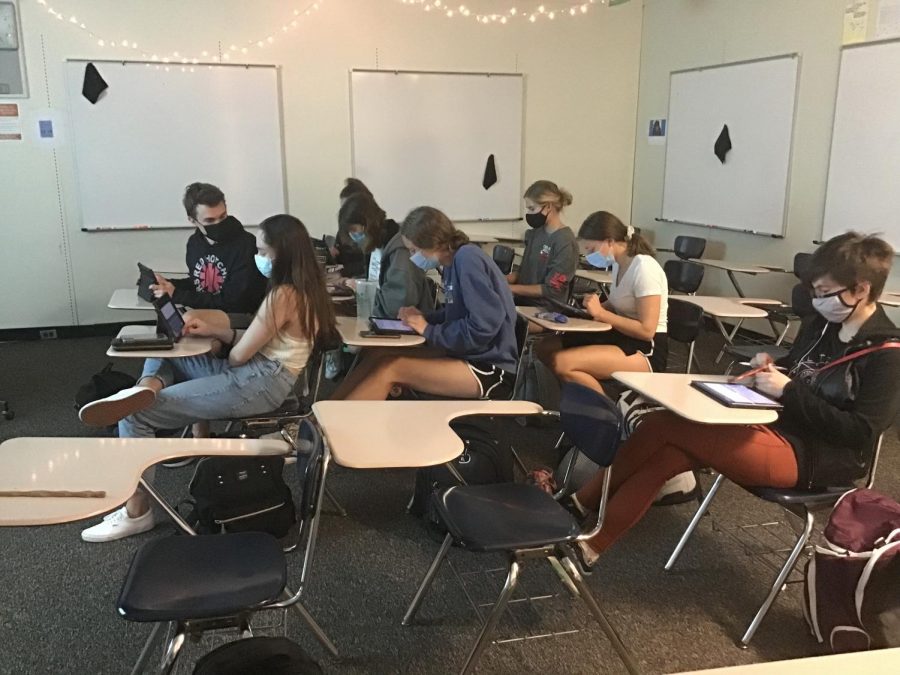 Creative Writing Club participating in a group writing session, about whatever they want

Creative writing club has begun its second year in Palatine High School, and after meeting online for the majority of last year, it had made the transition to in-person meetings.

Teacher Brenton Fisher, who’s the sponsor for the club, created it as a haven for those with a love for writing, no matter what their skill set might be.

“I want creative writing club to be a place where people who love to write do what they love,” Fisher said. “I don’t want it to be convoluted or confusing, all I want is for people to come and enjoy writing.”

The club itself has no traditional competitive components akin to speech or debate, however students do have the opportunity to submit their writings to the National Novel Writing Month website- shortened to NaNoWriMo.

“There are no competitive components, except for NaNoWriMo. In that case, it’s us against the world,” said Fisher.

Initially, the club was made simply to submit novels for National Novel Writing Month, typically shortened to NaNoWriMo. However, so many people joined that Mr. Fisher created the club alongside Ms. Lindstrom.

“We wanted to do NaNoWriMo, and we offered it up to anyone who wanted to do it, but we got so many people that we just decided to make a creative writing club,” said Mr. Fisher.

Speaking of those who joined, members of the creative writing club have nothing but positives to say for the club.

“During the pandemic, it was a nice way to hang out and connect when we were so disconnected,” said one member. “And now it’s the club I look forward to the most.”

Sharing writing within the club is a common occurrence, but the club remains a no-pressure environment.

“If you don’t feel comfortable, you don’t have to share if you don’t want to,” another member said. “Everyone is very kind and no one judges anyone, ever.”

Last year, the club dabbled in all types of writings, whether it be one word prompts, poems, or even short stories. Some have even been submitted and published, which is what happened to creative club member Carolyn Johnson. Her article can be found here.

“Carolyn published a short story last year, and it was amazing to see,” Mr. Fisher said. “And we’re definitely going to be looking at submitting more stuff to be published.”

At the end of the day, the club is a place where students, no matter what, can meet up and share their love of writing with one another.