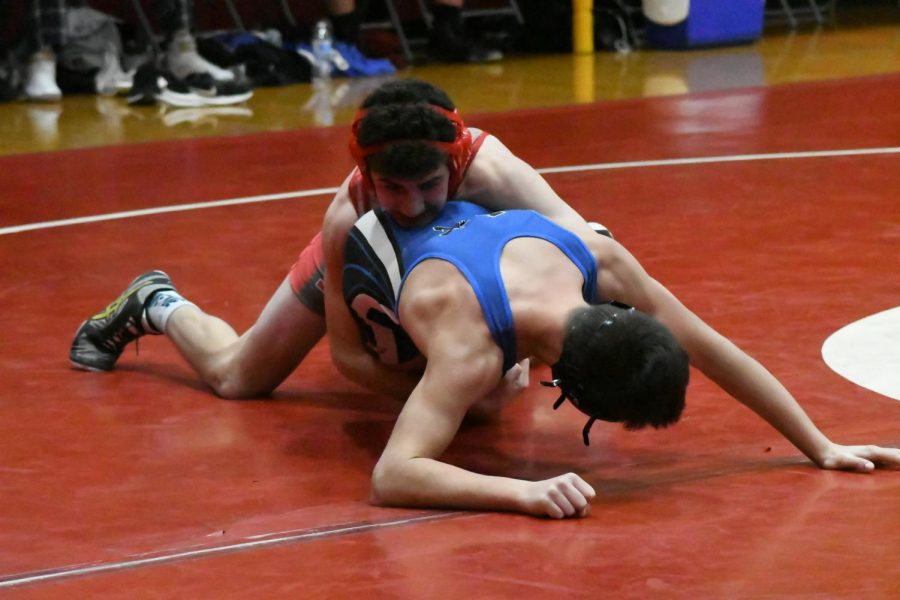 Palatine High School Pirates falls to the Conant High School Cougars in a competitive wrestling match on Dec. 10. This photo is from a wrestling tournament held at PHS on Dec. 4.

CORRECTION: The original version of this article mistakenly had Ethan Stiles, instead of Josh Morrison

On a rainy night in Palatine, the Palatine High School Pirates showed fight early on and towards the end against the 21st ranked Conant High School Cougars but ended up falling short in the 18-54 loss.

The meet started at 106 lbs, the lightest weight class in a varsity wrestling meet. Manny Rodriguez (Jr) got Palatine ahead early, with a decision victory over his Conant opponent, to give Palatine a 3-0 lead.  Palatine would follow that up with a pin from Ricardo Vital, before forfeiting the next weight class and getting pinned in the next one to go down 9-12 in the match.  Conant would win the next two matches by pin and decision for the 9-21 lead before PHS got to the best match of the night.

At 145 lbs, the matchup was between senior Joey Spizziri of Palatine and Conant senior Josh Morrison. The match started crazy enough, when in the first few seconds of the match, Stiles got Morrison’s leg and it became a battle between the two, with Spizziri hopping around, trying to avoid the trip and Morrison trying to bring Spizziri down.

That battle ended with Spizziri hopping, flipping in the air and falling down out of Morrison’s grasp but ended up with a whistle getting blown for being in a potentially dangerous situation. A situation that could cause serious harm to a wrestler is one the referee can whistle to stop the situation from getting worse. Spizziri ended up with a point and a long discussion amongst the scorers, referees, and coaches about what to do. This ended with Spizziri keeping the point he got and moving on with the match.

Other than that moment early on, nothing else too significant happened other than just a constant battle happening for the next three periods. After the match went three periods it was tied at 5-5, so it went into overtime. In the first sudden death overtime, the battle continued but then came the two 30 second tiebreaker periods. The battle continued here but Morrison was able to escape and get the 1 point lead.

Then, in the final seconds, Spizziri took Morrison down near the out of bounds, and had him for what looked like the 2 points to win, but the referees called it out of bounds at the buzzer and so Spizziri lost a double overtime thriller, 6-5.

Conant proceeded to dominate the next three matches as with victories in all three of those matches before a Palatine forfeit made it 9-45 Conant. At 195 lbs the Cougars pinned a Pirate for another 6 points to add to their winning total.

However, the Pirates were able to get back with Leo Franco (Sr) at 220 lbs, winning his match 11-8, and Gustavo Gonzalez (Sr) pinning his opponent in a very good match. That leads us to the final score of a Conant win; 18-54 against the Palatine Pirates.

Palatine is back at it again on Saturday Dec 11 at a varsity tournament, before their next dual meet being at Fremd High School in Palatine on Thursday, Dec 16. Palatine is 1-4 on the year, 0-4 in the MSL, and 0-2 in the MSL West.