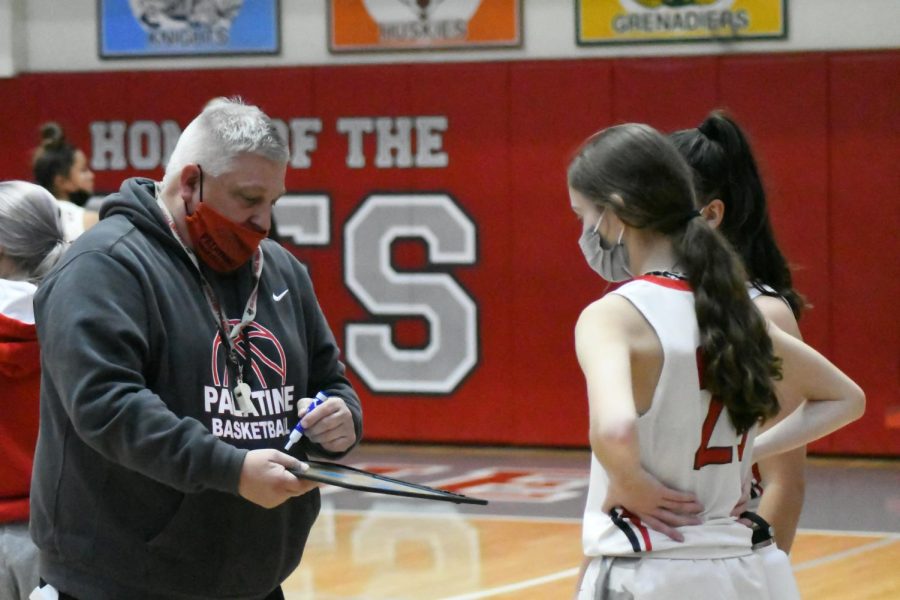 Coach William LePage talks with players on the Varsity B team at a game against Buffalo Grove.

Palatine High School teacher and sports coach William LePage has transitioned to coaching girls varsity basketball for the first time since coaching the lower level teams. PHS Cutlass was able to speak to coach LePage about his new role and how the season has been for him.

Congrats on your first year as a varsity basketball coach. How do you feel about it?

“It’s a lot of fun. It’s a lot of time, commitment. But what do you have when you have good girls and you have a good coaching staff? It makes it a lot easier.”

What is the biggest difference from coaching sophomore level and the varsity level?

“It’s the time you put in getting prepared for the game, it’s the intensity. I mean, it’s a big transition, but it’s a good transition. Preparation is the biggest thing; knowing the opponents, not going into a game, not knowing what’s happening. Now we know whatever team does.”

In terms of confidence, do you believe your team is ready for the upcoming games?

In addition to winning a championship, what are the goals for your team?

“We want to win every home game. If we win every home game, that puts us in a pretty good position where people have to prepare for us when we go to their place. And when we go winded on the roads, hard to do, but we think that we can’t give up on our home court. We take pride in what we do at home. If we play well at home, it’ll give us confidence to play on the road.”

What is a successful season for you?

“You know, what defines success. I mean, success is having a winning record, it would be success. But I think success is that we’re meeting our full potential. That’s success to me that the girls are met to their full potential of what they’re capable of doing.”

When your team plays their best game, what does that look like?

“When everybody scores, and then that manufacturer in the last game did that 62 to 16. Everybody scored, that was successful, everybody gets in the game, everybody does their job. They might not be in [to] score a ton of points but they understand their role. That defines success for me.”

What are the challenges with this team?

From all of the players who has impressed you the most?

“We got 12 Girls, they’re on this team for a reason. We got returning seniors, they’re good role models for the younger girls. And that’s what impresses me, is how they accept these girls on the team.”

Who do you think is a key player in the team?

“Well, Maddie Stark is a senior. She’s pretty close to scoring 1000 points in a career. She’s gotten the opportunity to do that this year. You know, she’ll be the all time career leader and still here at Palatine high school. So I think that’s where we start with her. It’ll be the girl that is the one we looked for.”

Is there anything that I haven’t asked you that you want to say?

“No, I’m just happy to be given the opportunity to be that basketball coach at Palatine high school because it’s a lot of fun. I’m having a great time. And I think that will be fun to watch and we’ll be in the thick of things at the end.”