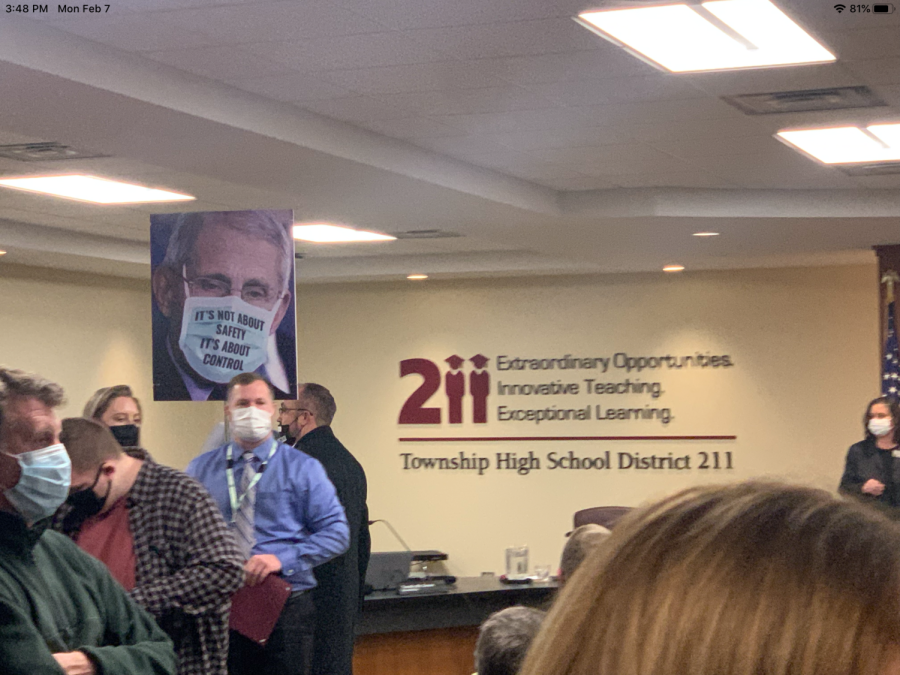 Anti-mask supporter asserts stance through sign as public settles in.

Rumors the far-right militant group “The Proud Boys” would make a presence at the Jan 20 District 211 Board Meeting to support anti-mask lawsuits summoned community support.

“My mom is part of a Facebook group called Progressive Palatine, and showed me a post someone else in the group had posted..about the Proud Boys appearing,” PHS senior Beth Eterno said. “The post included a flyer that had been sent around to the Proud Boys, urging them to show up. After seeing the post, my friends and I made a post about it on our social media, urging others to show up in protest against the proud boys.”

Long time D211 citizens such as Tom Dempsey and Maria Gallo used the district podium to bring a message of support to the board. Other community members such as religious educator Mary Sheldon and parent Joyce Slavock mentioned issues of curriculum standards and staff diversity.

“It has been publicized on social media that a specific, only male group known for violence and intimidation were going to be present at tonight’s meeting to show support for the anti mask lawsuit that has been brought before our district,” Palatine community member Jane Van said. “School districts and other institutions may mandate mask wearing to protect those in their buildings. If there are people present that feel they can intimidate this board and this community to not follow the scientific guidelines. You are wrong.”

Proud Boys did not attend the meeting in visible markers, but opposing ideas were represented by other citizens.

“Even with a mixed bag of public commenters coming up to speak, I think it’s important to hear all of the comments, as it gives an idea of the opinions that exist within the district,” Eterno said.

Citizen Dave Pritchard advocated for a variety of issues in the 5 minutes given to public commenters.

“We cheered last Saturday when..Virginia Governor Glenn Youngkin ended mask mandates for public schools, removed gene therapy, jab requirements for state workers, and banned the teaching of critical race theory,” Pritchard said. “We live in..Crook County where local unions, the Illinois State Teachers Union, and leftists, politicians and judges have institutionalized and mandated the indoctrination of our children. We call on the superintendent and the 211 School Board to show leadership as the largest high school district in Illinois and abolish the scheme.”

On Oct 21, 2021, during one of the weekly board meetings, the “anti mask” lawsuit was served to the board.

It can be classified as a class action lawsuit, as the lawsuit is on behalf of all the students and parents in the school district areas sued, including 700 parents and 145 districts. These parents filed the lawsuit due to their opposition to masks, school related covid tests, and quarantine regulations by school.

The lawsuit, headed by Tom Deovre of the Silver Lake Group, asserts how Governor Prtizker abused his power by increasing the control that district authorities and state agencies have over students. Additionally stating that the only ones who could enforce quarantines would be courts and the county health department.