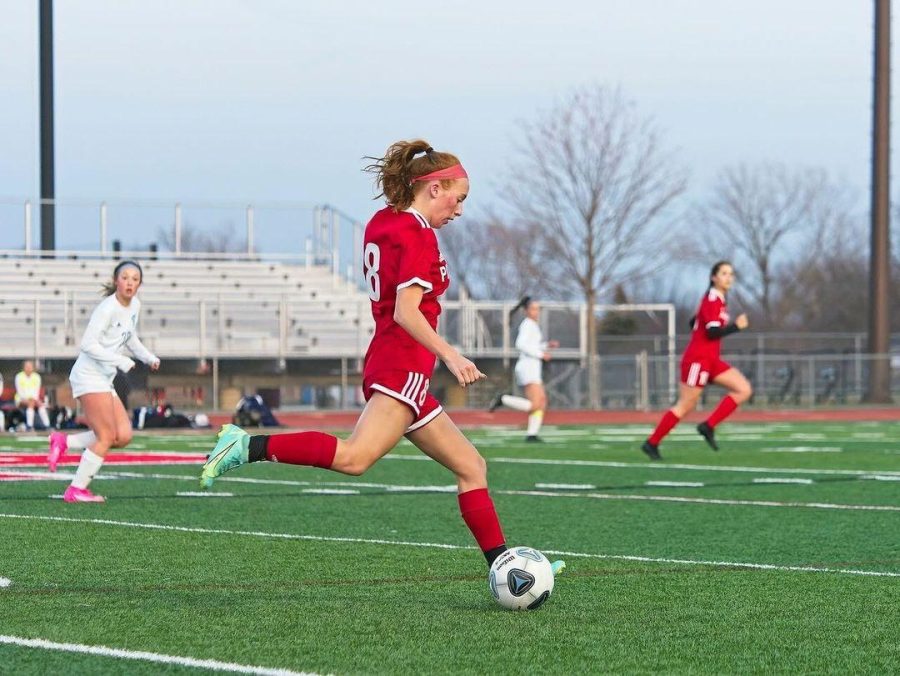 Used with permission from Jason Klein

Junior Sofia Klein runs on the PHS stadium field to help the Pirates score a goal.

The Pirates lost 2-0 against Prospect High School in their fifth game of the season.

The evening of April 1, 2022, the Pirates hosted Prospect HS, looking for a second win in a row after beating Waukegan HS in their last game.

“We put up a good fight where we were aggressive,” Palatine HS Junior Angelina Lopez said. “We have to talk more and communicate more in the middle because that’s where they were beating us. They had players in the middle open where they were able to dribble and then score half shots on us.”

It was a great start for the Pirates who started aggressively with a few chances within the opening in the first half. As the game progressed the Pirates started to lose possession of the ball. Consequently, Prospect HS scored but the second referee determined it was an offside goal which didn’t count. The first half ended up 0-0 on the scoreboard with a solid & defensive performance for the pirates.

Nothing changed for the Pirates as the second half started to play. Prospect HS was taking advantage of the lack of possession and ideas from the Pirates. The first goal of the evening came after a long distance shot from Prospect HS.

The Pirates started to play better trying to tie up the game, but Prospect HS displayed an effective performance by their defenders. Close to the end, Prospect HS scored the second goal after a great header in the area coming from a spectacular corner kick with only 4 minutes remaining on the clock.

Nothing for the Pirates who struggled to create opportunities & keep possession of the ball. But also, the Pirates showed improvements in a well defended and aggressive performance by the girls.