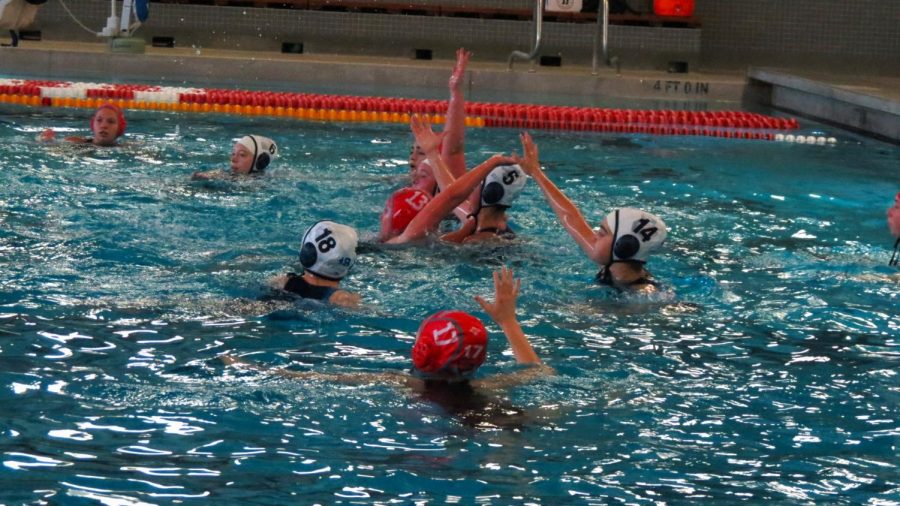 PHS water polo players attempt to secure a goal as they all reach for a ball to be passed.

Palatine High School had a competitive weekend as they held a two-day long tournament at home against multiple schools from Illinois for girls water polo, achieving fifth place in the end.

PHS girls water polo (0-10) started their tournament playing against Prospect High School (11-6). Prospect HS started off strong with the first goal of the tournament. The Pirates were able to hold off the Knights for some time with impressive defense. Palatine junior Olivia Pena was able to score the first goal for the home team.

Prospect aggressively tried to get as many goals as they could with fast throws to the goal. Palatine senior Sofia Maldonado held back Prospect players as they attempted to get the ball to the goal. The final score at the end of the game was 2-13, a Prospect win.

The next competitor for the Pirates was the Lake Forest High School Scouts (11-3). LFHS started their game strong by scoring quickly. LFHS seniors #13 Ellie Digby and #14 Grace Gilleran were the best scorers of the game, getting four goals total in the first quarter.

PHS junior goalie #1 Kieran Ohmes showed strong initiative with many blocks from attempted goals from the Scouts. With four seconds left on the clock, Ohmes swam half court to score a successful goal on LFHS. The Scouts won 4-11.

The second day of the tournament started with an exciting game against the Maine South High Schools Hawks (7-7). The Pirates upped their defense during the game playing against the team. PHS junior #13 Cadyn Piers and #21 Emily Czechowski were able to pass the ball in tough situations to each other, with Piers scoring a goal from all the way on the right side of the pool. PHS #15 Calla Carlson was able to achieve the same in the third quarter.

MSHS senior #10 Alexis Gianola kept the game moving for the teams as she scored multiple games and had aggressive plays, at times taking her out of the game. The Hawks won the game, 4-9.

The next game for the PHS girls water polo program is this Thursday at  6 P.M at home. Come celebrate the senior players as they play against Lincoln Park High School for senior night!