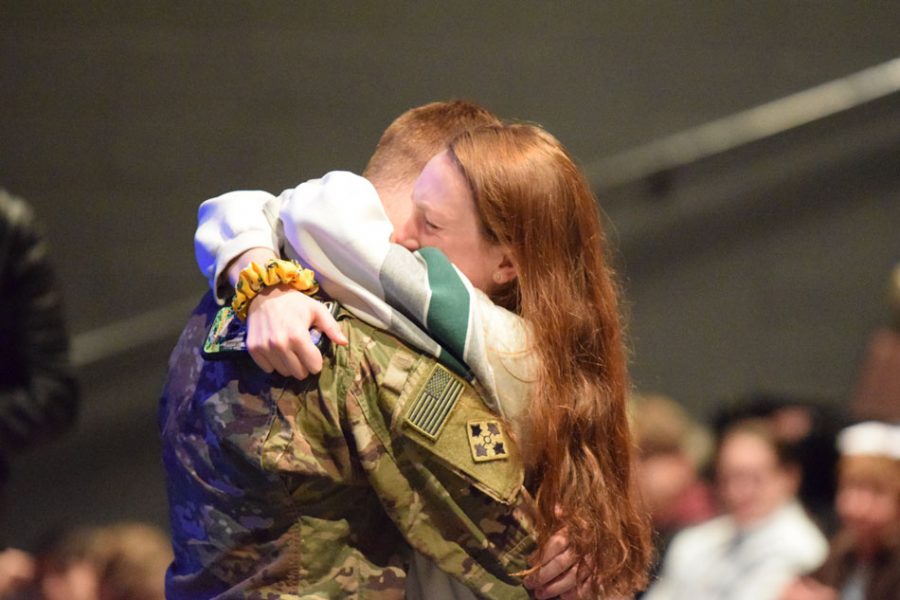 The Osterhues family reached out to Palatine High School to help make this reunion special.

Marlena Osterhues, a senior at Palatine High School, was surprised by her brother, Garrett Osterhues, just in time for Christmas. Osterhues had been deployed overseas in the army and they hadn’t seen each other in nine months.

Last Wednesday, Principal Gary Steiger brought the idea of surprising Marlena to Social Studies teacher Hamman, where she played a big role in developing the surprise event. A surprise like this took careful planning which lasted over the span of a week.

“Mr. Steiger was contacted by Marlena’s family, and he came up with the original idea to have a big surprise in the auditorium,” Hamman said. “We came up with the fake cover story. I asked Marlena if she would speak to the audience about what it’s been like for her to have a loved one overseas in the military.”

It was crucial that Marlena believed the fake cover story. Hamman asked Marlena to introduce the guest speaker by having her talk about her personal experiences of having her brother in the army.

“She thankfully agreed immediately, and then we headed to the auditorium, where her family was hiding in the sound booth and her brother was hiding backstage,” Hamman said.

Hamman passed the microphone to Marlena in front of the audience, which consists of a handful of Social Studies classes and P.E. classes. Marlena mentioned that she hasn’t seen her brother in months and that Garrett won’t be able to come home for the holidays. She didn’t know that Garrett was right behind her.

The entire event carried out just as planned. Marlena Osterhues was astonished to find Garrett walking across the stage in his uniform.

“I turned around and expected the guest speaker to come out, so when the light finally hit his face, my jaw just dropped,” Marlena said. “I was just so in shock for not knowing.”

Marlena approached Garrett with open arms and tears across her face. The auditorium applauded as the two came together for a hug. Friends and family came together to take photos of the occasion.

“I was incredibly nervous that I would mess up and ruin the surprise, but also excited to be part of such an incredible moment and grateful to have the chance to thank a service member and his family for their sacrifice,” Hamman said.