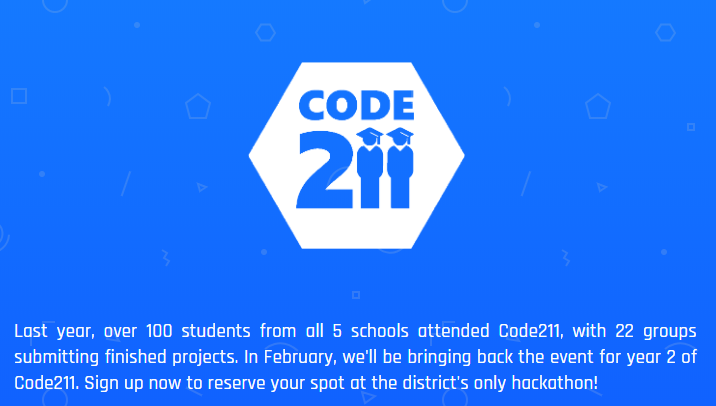 Code 211 offers 11 workshops and is completely free to D211 students.

Are you ready to start hacking?

Code 211 is coming to District 211, at Fremd High School, Feb 1 and 2 and it’s time for you to learn how to code. Throughout the two days there will be different workshops ranging from how to create your own app, to a website, to online games.

Code 211 began last year after 2018 graduates Evan Eckels, Bhargav Yadavalli, Robbie McCracken, and Avi Saxena came up with the idea and proposed it to the Board of Education. They had all participated in and planned other Hack-a-thons around Chicago and wanted to bring it to District 211.

This year Code 211 is headed by seniors Annie Clement, Dominique de Fiesta, John Wang, and Andrew Frank. They are in charge of advertising the event and running workshops. Both John Wang and Andrew Frank will also be giving a computer hardware presentation where they will be dissecting a computer and explaining the different parts and functionality.

“Code 211 was made to bring people together to learn how to code as well as for people to show off what they’re able to code.” Clement said.

Code 211 is not only for those who know how to code. Code 211 is for everyone from beginners to advanced.   Being the second year Code 211 has happened, there will be a more structured schedule and different workshops for each level of programmers so that everyone is producing something at their skill level.

“There’s a learning portion of the event as well as a time for people to present their creations for a chance to win prizes,” Frank added.

Dominique de Fiesta said she was most excited for Code 211 because, “you are able to interact with and get to know students from other D211 schools who you wouldn’t usually meet.” One of the biggest events happening at Code 211 is the “code an entire project in 20 hours” competition.

John Wang stated that, “at Code 211 you can code whatever you want. I know that in a lot of computer science classes there isn’t much freedom for projects, so the fact that students can make literally anything is something new and exciting.”

It also is a great way to spend time with friends and make some new ones as you all create your own projects.

If Code 211 sparks your interest, make sure to sign up here.