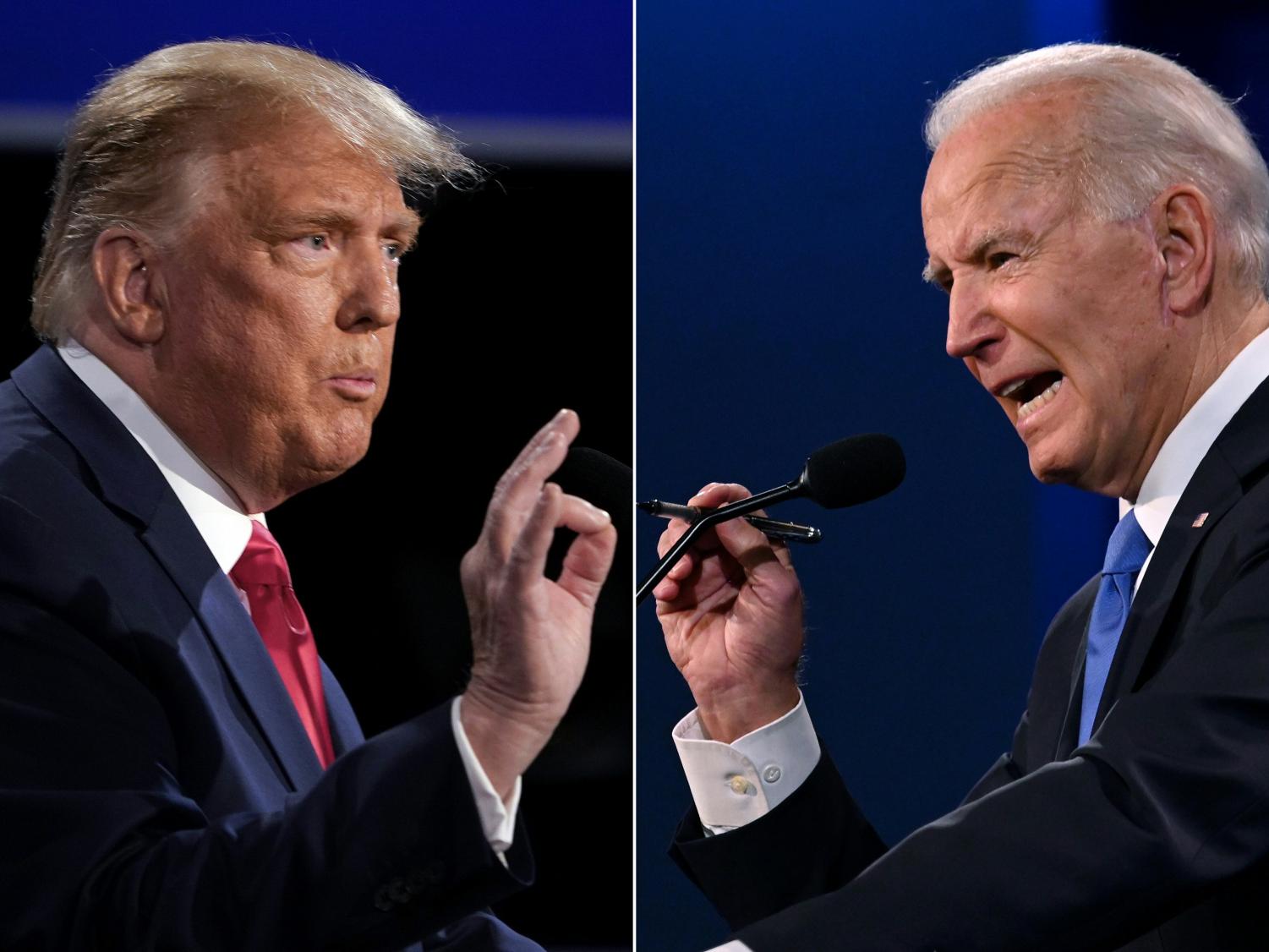 This combination of pictures created on October 22, 2020 shows US President Donald Trump (L) and Democratic Presidential candidate and former US Vice President Joe Biden during the final presidential debate at Belmont University in Nashville, Tennessee, on October 22, 2020. (Brendan Smialowski and Jim Watson/AFP via Getty Images from Tribune News Subscription)

How the media covered the 2020 election

As the presidential election comes to a close, broadcasting companies are amping up the amount of news they are covering. The next few days are crucial for listeners, viewers, and readers to receive their information from these outlets to gain a clearer understanding of what is going on in politics.

CNN put together a stimulating visual for election night. Democratic candidate Joe Biden was representing blue, while Republican incumbent Donald Trump was representing red. The screen featuring the map of the U.S. was at the forefront, giving consistent updates of votes coming in. Overall, CNN kept things neutral with patriotic hues to emphasize American democracy.

Along with CNN’s clear and extensive visuals, the reporters spent hours on end analyzing and reporting on the voting results, all the way down to analyzing how one county in a state may affect the entirety of the electoral college votes. John King and other reporters such as Wolf Blitzer and Anderson Cooper spoke for hours on end without break, and continuously updated the CNN prediction as the results came in. The program took a few breaks and had conversations on each of the states expectations, and focused specifically on the swing states that would sway the results of the election.

CNN was trying to convey was that everyone needs to be patient. This is an unprecedented time for voting and it could take a while to count all the votes”

With the 2020 election votes still being counted, many news sources are trying to keep the people up to date on what is happening regarding the future of the presidency. CNN being one of those sources, we took a long look at the way it seemed to operate.

“There isn’t any magic involved in projecting races, sadly, it’s really all math,” CNN’s polling director Jennifer Agiesta said. “There are a number of things we are looking for in each state to have confidence in a projection.”

One of the main messages CNN was trying to convey was that everyone needs to be patient. This is an unprecedented time for voting and it could take a while to count all the votes so that every vote counts. They used different idioms throughout the night like “we’ll find out for sure when the cards are turned over” to show their message of patience.

CNN did a good job of eliminating bias in their language. For instance, they had a former Obama administration Van Jones representing the liberal side, and former republican Rick Santorum give the more conservative view, and overall kept an equal balance throughout the program.

Fox News had a nonchalant and a laid back reporting style. A majority of the reporters, analysts, and pundits were conservative Republican and white males, with a few exceptions. The language they used at times appeared to be skewed in favor of Trump, especially when they called into question the results and processes of the election.

Many voters questioned whether their vote was counted or not and especially since the mail-in vote has been extremely popular this year, people wondered if their vote was actually counted. Fox Reporter Audrey Conklin provided a list of how voters could check if their votes were actually being counted by actually going to their specific state.

“His path is with states that are being recounted,” host Bret Brier said.

Fox Reporter Audrey Conklin provided a list of how voters could check if their votes were actually being counted by actually going to their specific state.”

In the news, the reporters voiced their own opinion and use a lot of several visual representations of what is going on. It is more information the people are grasping by the visuals than by what is being said. The Fox broadcasters for the election, Trace Gallagher and Sandra Smith, voiced their opinions but also looked for information from data reporters to rely on their facts.

The strongest part of their broadcast was when Harris Faulkner entered to speak about people of color and police officers. This was the only time diversity seemed to emerge in the FOX TV broadcast.

“No one ever asked me about my politics when I interviewed at FOX News Channel, nor has it ever been discussed during my time at the network.” co-anchor Sandra Smith said to The Advocate. “I am a broadcast journalist. I report facts, and I report them fairly. It is the viewers’ job to decide.”

MSNBC heavily focused on reporting the data, being sure to explain the numbers without showing strong bias to either candidate. However, several of the reporting guests clearly focused on discussing Biden, showing slight disdain for President Trump. Mike Memoli was brought on specifically to discuss Bidens’s campaign, meanwhile, the network did not have a specialized reporter for Trump.

They used comparisons between the 2016 election and the 2020 election, to give viewers an idea for what states were expected to continue as either Democratic or Republican”

MSNBC throughout the night used a combination of graphics and language to explain to the audience what the numerous numbers on the screen were referring to. They were able to show a closer look at what each individualized county’s numbers meant for each county.

They used comparisons between the 2016 election and the 2020 election, to give viewers an idea for what states were expected to continue as either Democratic or Republican and explained which states each presidential candidate would need to gain in order to secure victory where the 2016 democrat could not. The usage of the 2016 electoral map was particularly helpful due to the slow count of votes due to mail-in ballots which made it difficult to show any significant results.

“Once result for mail-in voting come in, numbers could start looking very different,” the analyst said.

The hosts made sure to mention that most mail-in ballots would skew left, while in-person voting would skew right. This helped to explain why certain states didn’t have conclusive results quite yet. MSNBC primarily had white male broadcasters and journalists, with the exception of a few female anchors and Amy Holmes, a Black woman who holds a strong position as an anchor.

Due to the nature of the night, which was primarily data-focused, the lack of strong diversity did not devalue the reporting. MSNBC managed a clear report of data and explained the difficulties in making any guesses before the week is over. The channel continues to relay information to viewers, as votes come in.

As Election Day ended this Tuesday, many social media platforms attempted to stop misinformation from being spread easily. While some methods appeared to be more effective than others, misinformation was still easily spread.

Many sites did not stop people from posting, but they put warnings if something wasn’t actually true, or included a link to proper information without ever saying if what was posted was wrong. An issue most sites had to fight was candidates declaring victory too early.

Sites like Instagram attempted to stop this by showing people which states had officially been called in their Voting Information Center. Any photo or caption that included words about the election or voting was flagged with a banner. This banner directed the user to the center, and included many different facts.

Instagram still allowed any post, even with misinformation to stay up. In the post shown to the right, there is false information. If someone might miss the small banner and not even realize what they are reading is wrong. It would be much easier for a person to simply believe what they read than put in the effort to go through the Voting Information Center.

Twitter, another popular social media outlet, also made an attempt to halt the spread of misinformation throughout their sites. Twitter adjusted their trending page towards being all about the election or politics. Additionally, they created boxes that gave warnings to users if the post was false or misleading information.

Unfortunately, Twitter still had a plethora of misinformation spread amongst their site. Various posts and videos were spreading all throughout Twitter leading to mass confusion. Twitter did its best to delete the misleading information, but failed to filter out all of the false information.

The attempts weren’t perfect, but many social media sites did more than in 2016. They tried to stop things without being accused of infringing on people’s First Amendment rights. Not only that, most platforms used their prevalence in people’s lives to encourage higher voter turnout, safer regulations and creating a ballot plan.

If you want a picture to show with your comment, go get a gravatar.