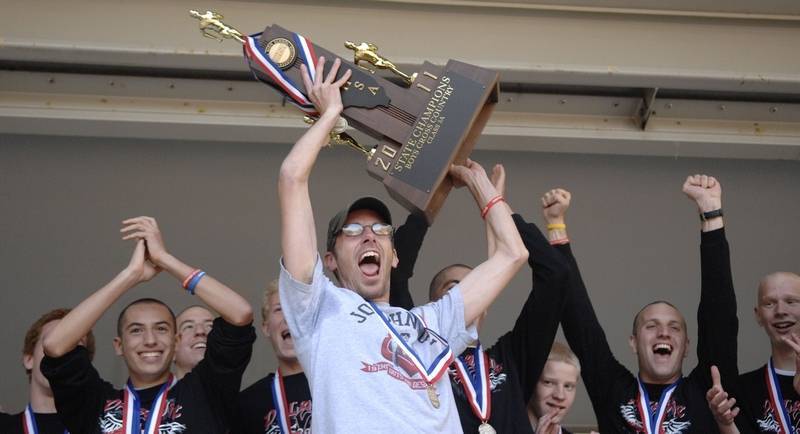 Chris Quick has been an English teacher and boys cross-country coach at Palatine High School for nearly 18 years. As a coach, he has trained hundreds of runners to meet their greatest potential, coaching teams to the IHSA state podium many times, including Palatine’s legendary 2011 state champion team.

As a teacher, he has taught a multitude of AP students the skills required for high-level composition, as well as a wide variety of students about the power of music through his Rhetoric of Music classes. An outspoken lover of the arts, Quick’s knowledge of film, music, and other media is nearly encyclopedic. I sat down with him to discuss his five favorite films, the pressures of being an AP student, and what the accumulation of power means in today’s world.

I have all kinds of movies that I love, but if I had to pick, my parameter is probably the movies that I want to watch over and over again. The first one is ​The Graduate​, and I relate to that movie on such a deep level. First of all, he was an honors student and cross-country runner, the main character, and he was just so lost and not wanting to get stuck into some superficial, weak, day-to-day existence, and he didn’t know what he wanted, he just knew what he didn’t want, and that, to me, captured a good five to ten years of my life. And I just didn’t really know what I wanted from when I was 15 to 25. Every time I need some clarity, I watch that movie over again. And it has a killer soundtrack, Simon and Garfunkel soundtrack, all kinds of great shots. Just an incredible movie.

SP: Going back to ​The Graduate,​ you’re a cross-country coach and AP English teacher. Have you ever seen a reflection of Dustin Hoffman’s character from ​The Graduate​ in your runners or students?

CQ: Honestly, I see a reflection of him more in my AP students. My favorite shot in ​The Graduate​ comes when he’s living with is kind of sold-out, bozo parents in California and he can’t relate to them at all, which is that whole, 40s and 50s generation not being able to relate to the 60s generation, which anybody can relate to in the sense that your parents’ generation, you’re just never gonna relate to, so there’s this scene where, for his birthday, his parents get him this scuba gear, which he’s never indicated any interest in.

There’s this great shot of him walking out and he has the goggles on and you can hear him breathing, but you can’t hear anything his parents are saying, even though they’re screaming all kinds of inane stuff for his birthday, and he dives into the pool in the backyard and the shot just ends with him standing at the bottom of the swimming pool while a barbecue happens above him. The movie starts where there’s this party honoring him for doing so well in college and he’s won some prestigious award and he’s got good grades, but he knows its all meaningless because everyone else is just reveling in his potential, and they make his potential a marketable thing to show what good parents they are. I think my Advanced Placement kids are under a lot of similar pressure to do something that’s worthy of their intelligence.

SP: Wes Anderson’s ​Rushmore​ has a sort of reverse of that scene happen, with that disconnect between generations where Bill Murray’s character is at his son’s’ birthday party and he just jumps off a diving board and sits at the bottom of the pool, getting away from the younger generation above.

CQ: I like the latter half Bill Murray’s career because I can relate to this kind of fish out of water alienation of older people that I feel almost every single day. I always find myself in the nexus of the scene where he goes off the diving board or even his entire character in ​Lost In Translation​, which is debatably also close to being on this list.